The 2016 Harlow Hill Squash Club Championships came to a conclusion on Saturday, 7th May when Richard Leonard took his eighth Open title against club coach and friend Steve Smith in a hard fought battle with a 3-1 victory, taking the coveted Cannon trophy. 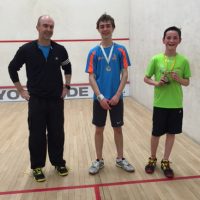 Starting the evening off was the inaugural Junior Championships where Oliver Watts overcame the challenge of Henry Heap in a very close match 3-2. The Plate final followed with Dan Lupton beating his long time nemesis Peter Moore, 3-0. On the day before Martyn Hall took the inaugural Veterans title beating Roger Calvert 3-0. The match was a lot closer than the 3-0 score suggests.

A special thank you goes to competition organiser and club captain Rob Cunningham, who’s tireless enthusiasm oversaw and scored most of the matches.

This website uses cookies to improve your experience while you navigate through the website. Out of these, the cookies that are categorized as necessary are stored on your browser as they are essential for the working of basic functionalities of the website. We also use third-party cookies that help us analyze and understand how you use this website. These cookies will be stored in your browser only with your consent. You also have the option to opt-out of these cookies. But opting out of some of these cookies may affect your browsing experience.
Necessary Always Enabled
Necessary cookies are absolutely essential for the website to function properly. These cookies ensure basic functionalities and security features of the website, anonymously.
Functional
Functional cookies help to perform certain functionalities like sharing the content of the website on social media platforms, collect feedbacks, and other third-party features.
Performance
Performance cookies are used to understand and analyze the key performance indexes of the website which helps in delivering a better user experience for the visitors.
Analytics
Analytical cookies are used to understand how visitors interact with the website. These cookies help provide information on metrics the number of visitors, bounce rate, traffic source, etc.
Advertisement
Advertisement cookies are used to provide visitors with relevant ads and marketing campaigns. These cookies track visitors across websites and collect information to provide customized ads.
Others
Other uncategorized cookies are those that are being analyzed and have not been classified into a category as yet.
SAVE & ACCEPT